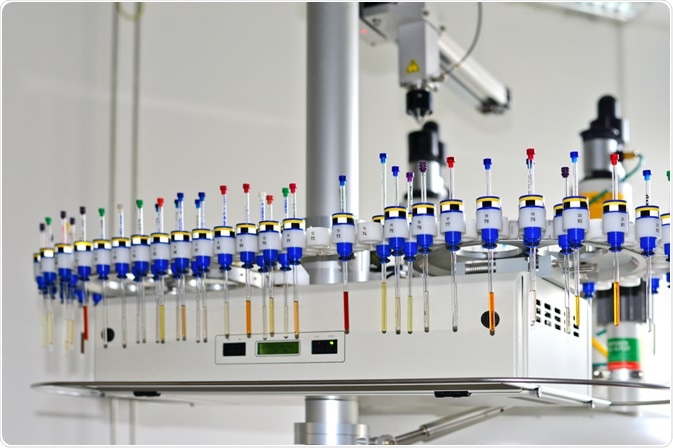 The NMR Spectroscopy Laboratory is a central University facility that provides access to state-of-the-art NMR instrumentation. It is administered by the WSU Nuclear Science Center as a member of the Nuclear & Chemical Sciences (NUCS) Core Facility. NMR equipment has been funded by grants from the National Institutes of Health, National Science Foundations, Battelle Memorial Institute, and the M.J. Murdock Charitable Trust.

The laboratory is open for users from across the WSU campuses and from outside institutions.

All publications that make use of the NMR Center should include the following statement in the appropriate acknowledgment section:

Open 24 hours a day, seven days a week, 365 days a year. Facility personnel are available Monday through Friday, 9:00 am to 5:00 pm. Access to the NMR Lab is limited to trained instrument users.

This instrument is the new instrument in the NMR Spectroscopy Lab. Users are trained on this instrument only upon request. It is primarily used for diffusion and solid-state experiments, but it is also capable of solution-based 1H, 13C, and multinuclear NMR spectroscopy (1D and 2D NMR experiments). The presence of a 24 sample SampleCase autosampler allows for automated data collection for data collection during off-peak hours. We currently have the iProbe available.

This instrument is one of the specialty instruments. It is primarily used for biological samples and 1H, 13C, and multinuclear NMR spectroscopy. It is capable of 1D and 2D NMR experiments. It is capable of HRMAS and analysis of solid-state samples but is more difficult to book long-term experiments than with the 500 MHz NMR spectrometer due to the demand for routine multinuclear analysis. HRMAS and solid-state samples can be analyzed with prior notice (3 days). The ability to autotune to many nuclei makes this the instrument of choice for multinuclear NMR spectroscopy (Click here to see the available nuclei). This is the instrument of choice for variable temperature experiments.

The PC in Fulmer B3 runs Varian/Agilent’s latest software VnmrJ that is compatible with all the NMR software versions running on the spectrometers in the facility. Data from the spectrometers can be analyzed here and processed. The results can be saved to a USB drive and printed at a local printer in the WSU NMR lab.

Here are a few freeware NMR processing software that are popular.

At present no other third party software is available for distribution by the facility. But here are some links you can explore and buy the software if found suitable for your own use.

In Case of Emergency

There are multiple potential hazards in an NMR lab. In order to use the NMR facility at WSU, you must read and be familiar with the following safety information. Failure to comply with the correct standard operating procedures in the NMR lab can result in damage, personal injury, and even death. Please let an NMR staff member know of problems as soon as you encounter something that seems not quite right. If you can’t find a staff member, please submit a Problem Report using the form on the website.

Current Probe: Broadband probe (DBG-500) X-observe and 1H decoupling. X-Observe channel 2 is normally tuned to 13C. X-Channel may be tuned to 31P, or another nucleus, in which case 13C NMR is not possible.

Bruker Avance Neo 500 MHz: Not Available, due to Probe Installation